Benefits Save time by quickly setting up instances. Control exactly how you want your instances to look.

So we have two family members already, the parents, ie the masters, then they mix to form the children.

In fonts, these children are called instances.

What Are Instances Good for?¶

When a font user installs a variable font, this will be a list of the styles they can choose from. 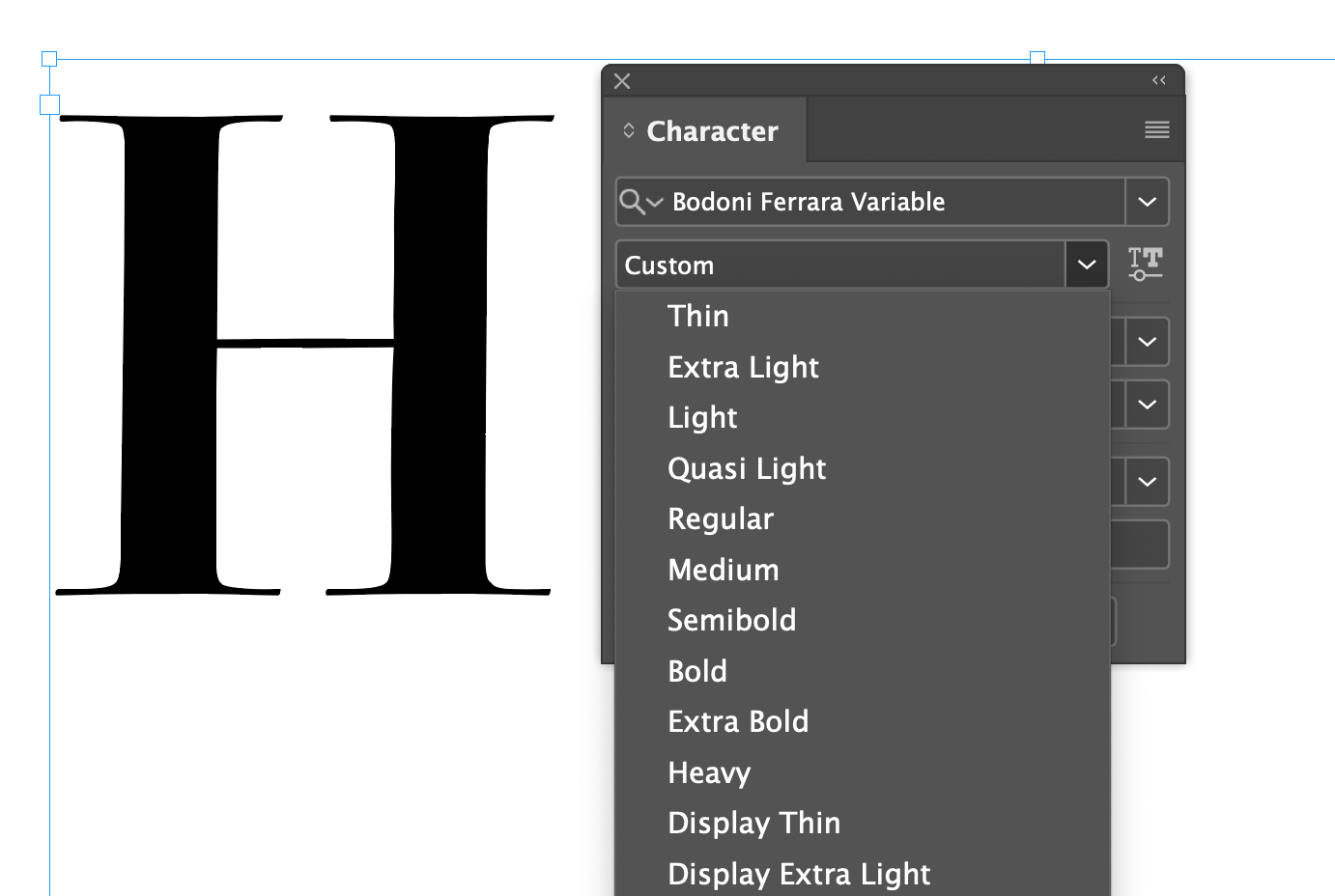 Besides this, the user can choose any custom axis point. But this gives him a good starting list.

Also if you are making static font families, such as OTF, TTF, WOFF, WOFF2, the instance list is used to export various styles.

❶ You can use your file from the last tutorial. Or you can download this file.

Load it up into FontLab.

Use the Variations Workspace. Go to menu: Windows > Workspaces > Variations.

❸ Now in the middle of that page, it says “From Axes”, “From Masters”, “From Graph”. Since our Axes instance list is wrong, for now, push From Masters. The instance list should be populated with your Semibold and Hairline.

❹ Push OK, to go out of Font Info.

Before we get to making manual instances, a word about…

It becomes an H that is darker!

In between the masters, the mix is called an interpolation.

Outside of the masters, it’s extrapolation.

Extrapolation is the dotted lines on those charts telling you to buy a certain stock or financial product:

An homage to Dwiggins.

The stuff on the dotted line hasn’t happened yet!

How are you to know what will actually happen?

Here’s a way you can think about the extrapolation in FontLab.

The 220 master isn’t there! However, you can continue the trajectory of the nodes. You can see what 220 might look like.

It’s just like the stocks. Sometimes the trajectories happen. Other times predictions are wrong. You lose all your money in a stock market crash.

For now, we’ll avoid instances along the dotted area.

If you don’t want to see extrapolations in the Variations panel, go to Font Info > Axes. Set your weight axis max to 128.

Suppose you make a variable font using the above numbers. You make an instance at wt140, outside of interpolation, into dangerous dotted territory!

You will be out of range, and when you export, you will get a message like this: 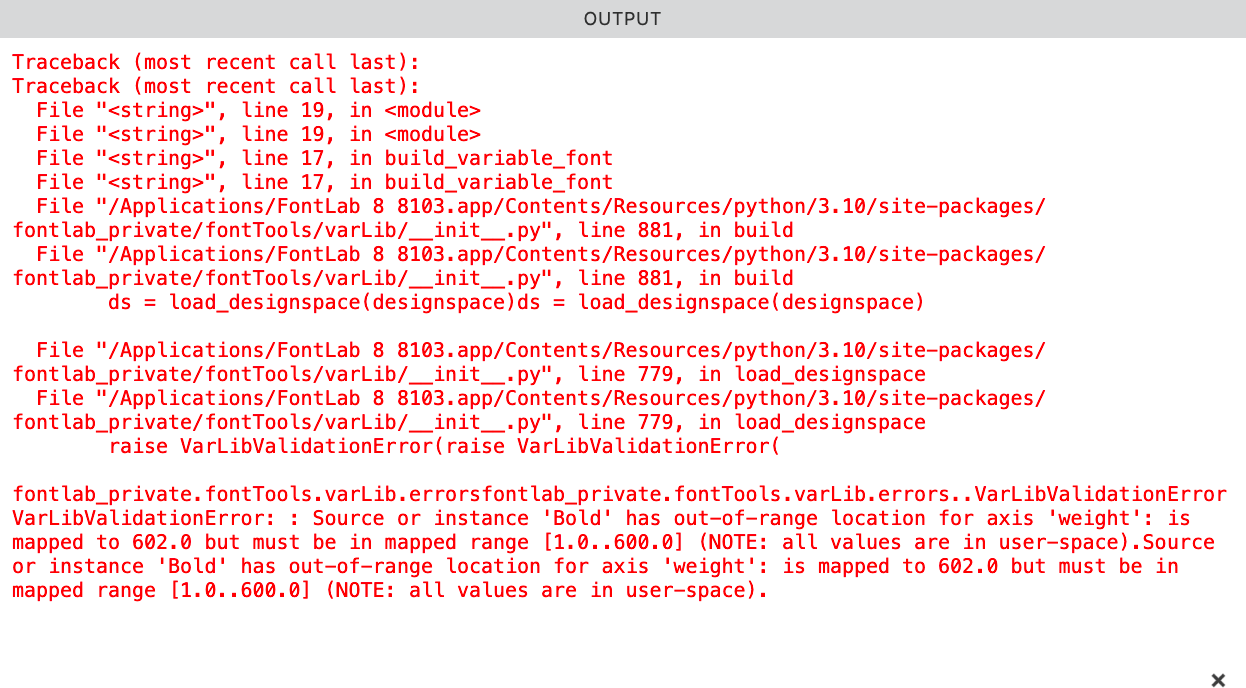 So keep instances between actual masters.

⓿ Make sure you have the Variations Workspace open.

❶ Variations panel, top left, there’s a button with sliders on it. click that. Now click the bottom button for instances.

❷ Use the slider and add instances.

Here’s how you do it.

First open up your Preview panel, so you can see what is happening.

Move the slider, and then click the lower + button.

Here’s the weights you might want to think about when making this.

You don’t need all of these. Here’s an example of how you might do it. Remember to choose even numbers.

You’ll notice that all these are getting named as Thin!

Don’t worry, we’re going to change that next.

❸ Go to Font Info > Axes. Let’s import the instances from the once we just made!

❹ Go to the instances panel and now import from the fresh axes names.

Your variable fonts will have these predefined instances.

That little blue dot in the master’s panel assigns which master is primary. 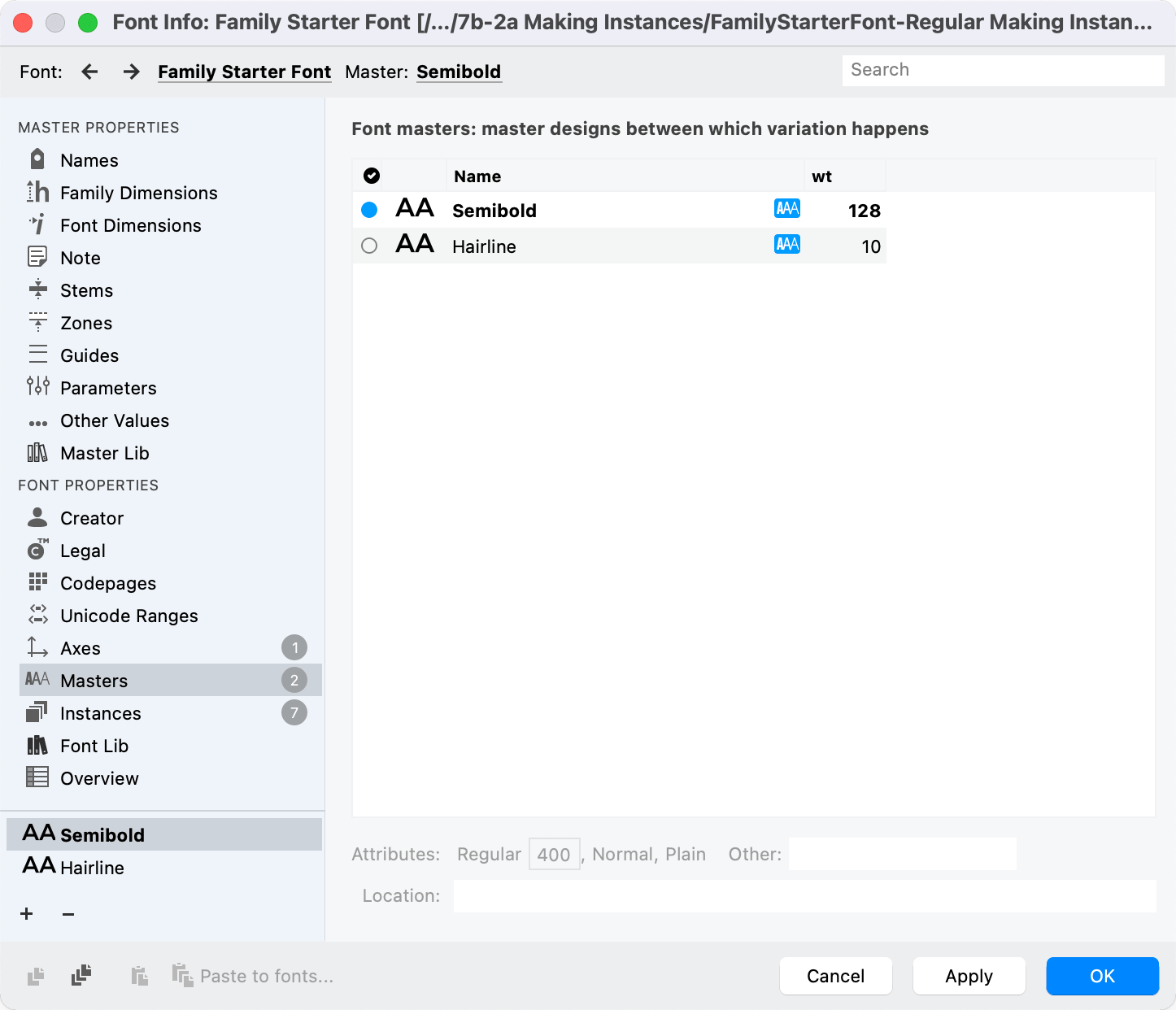 The blue dot master does all these things:

If Semibold is the primary master, but you don’t have it on the instances list.▼ 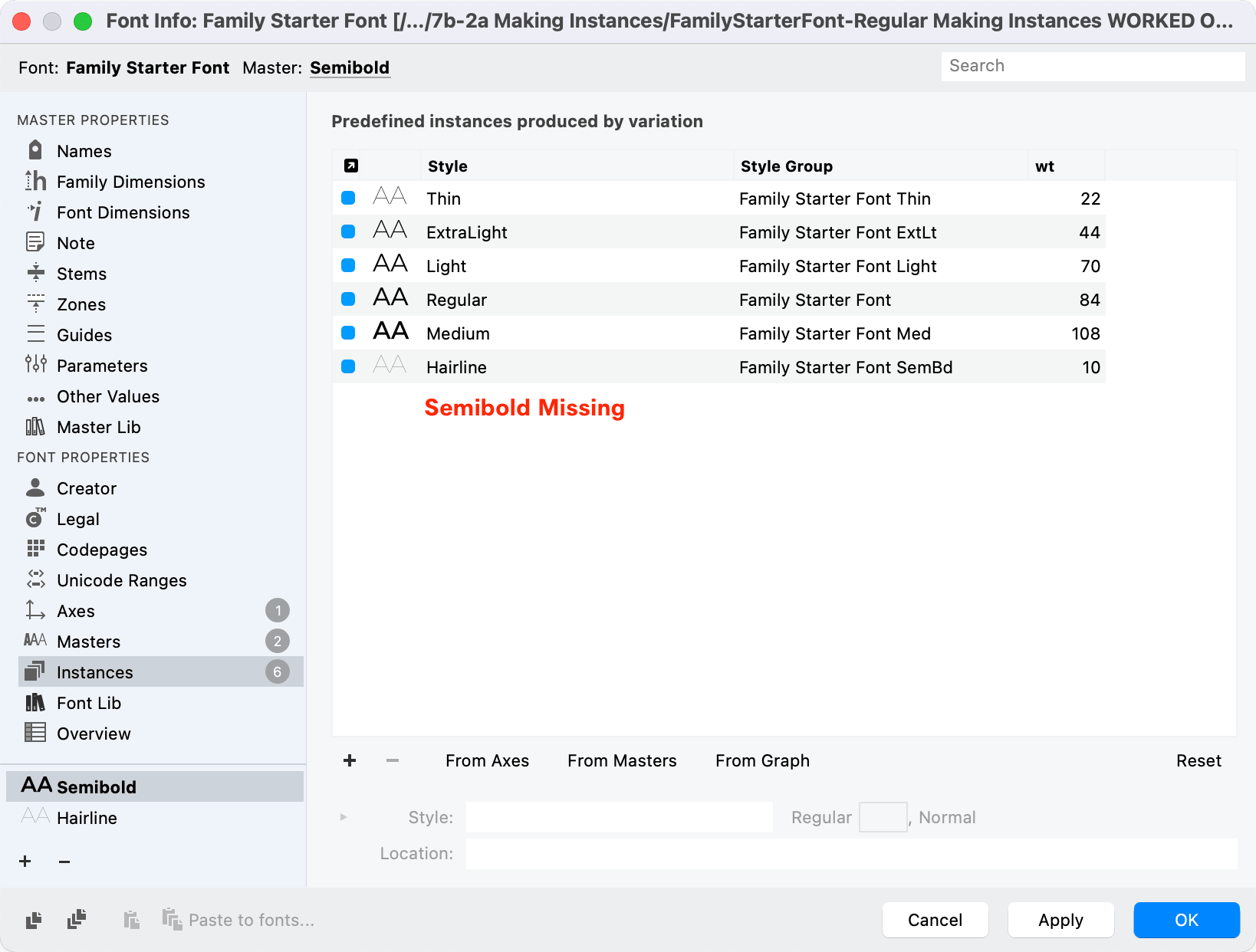 In programs, the blue dot master will be at the top. 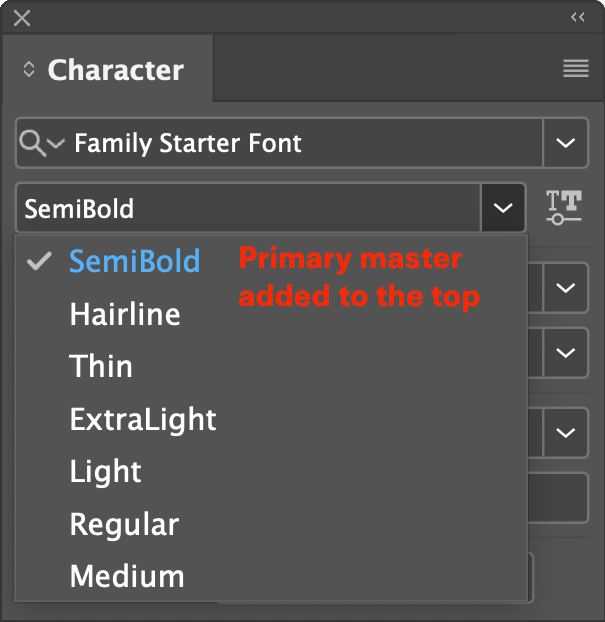 The blue dot master will be shown as default in some programs, such as the Praxis Axis test.

When a person installs the font on the computer, the blue dot master will be the one that is shown.

For example, if I changed the hairline to be the blue-dotted master, it would show.▼ 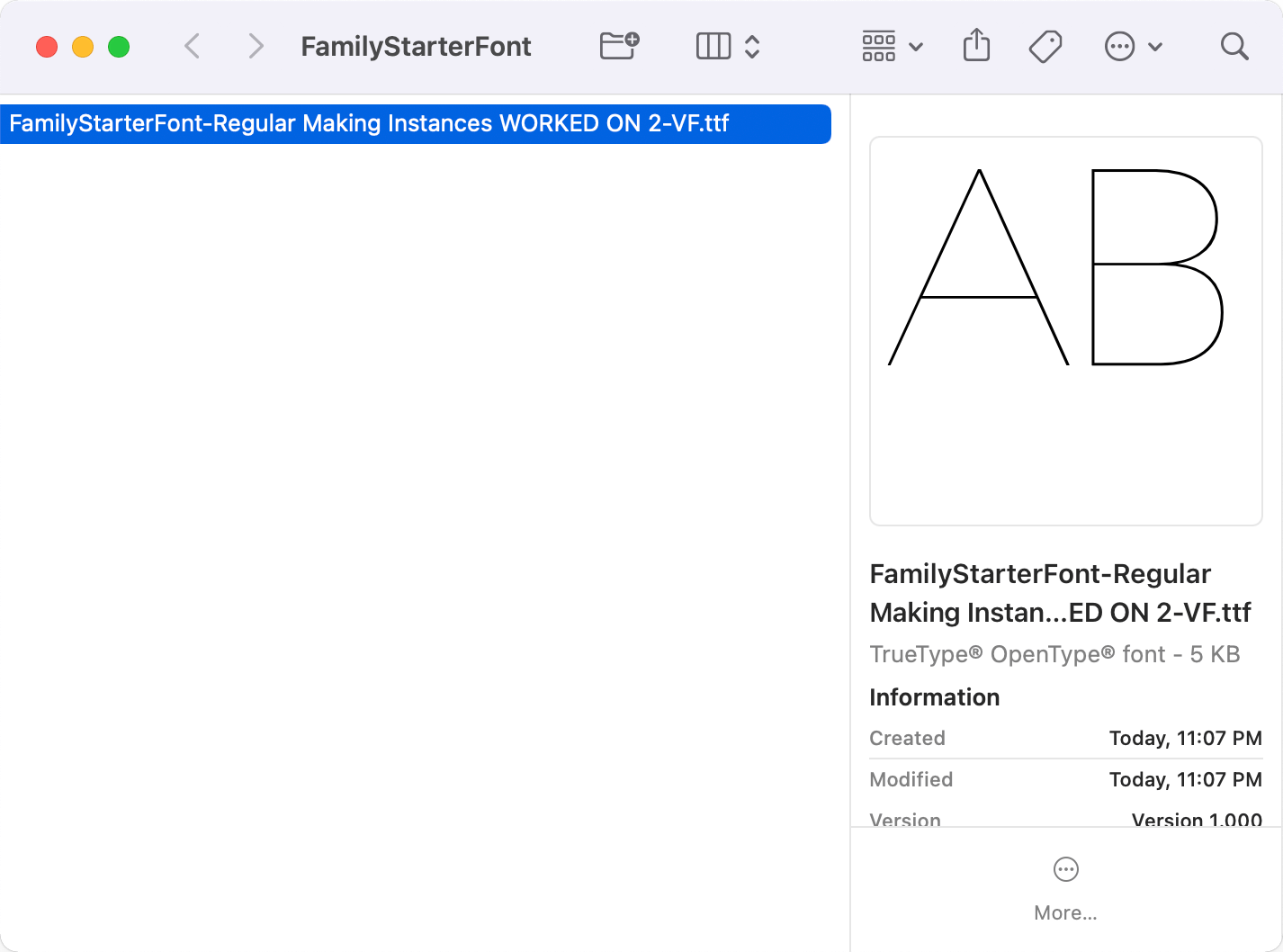 The blue dots in instances are entirely different!!

These assign what will show up in export. 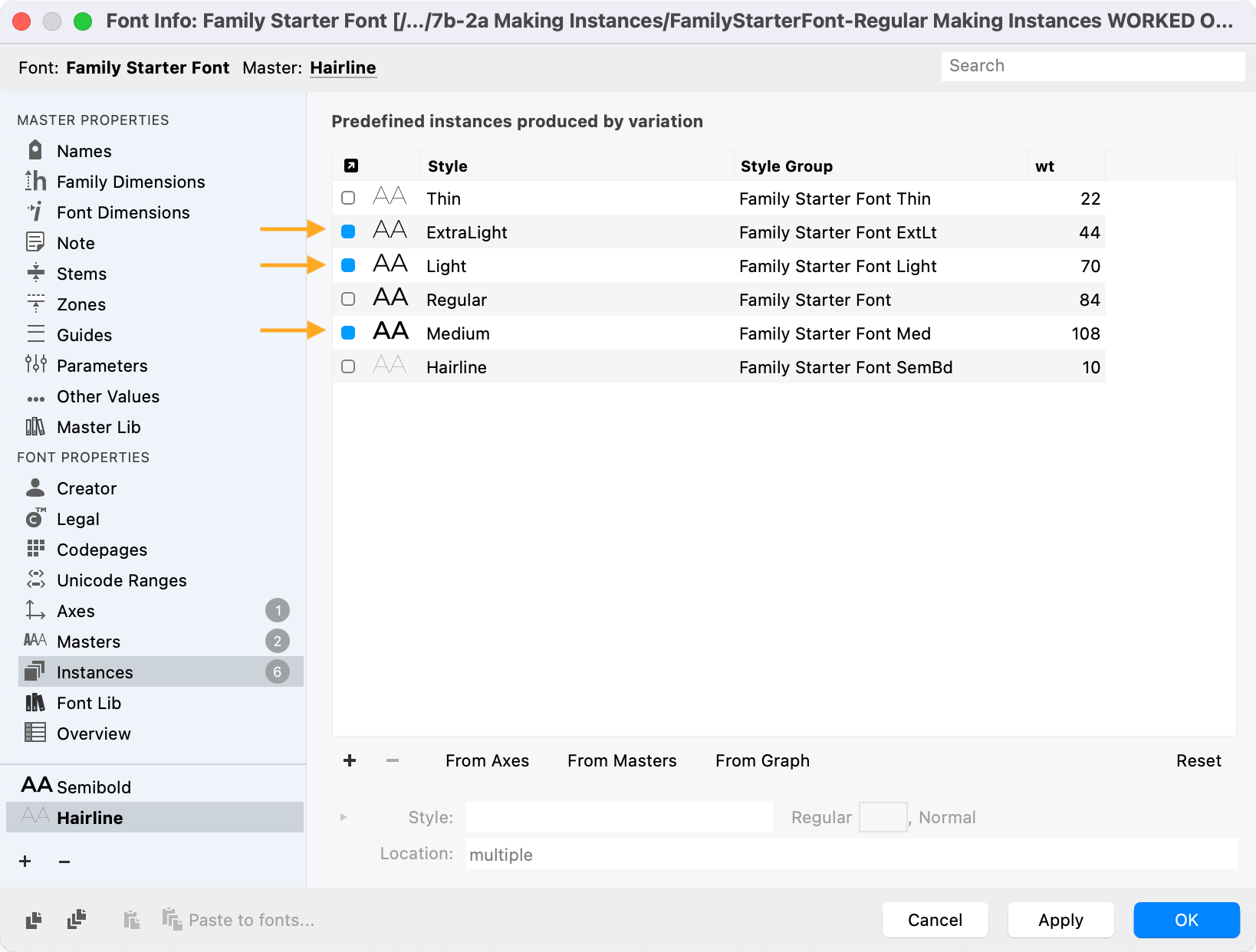 Now when you go to File > Export Font As… 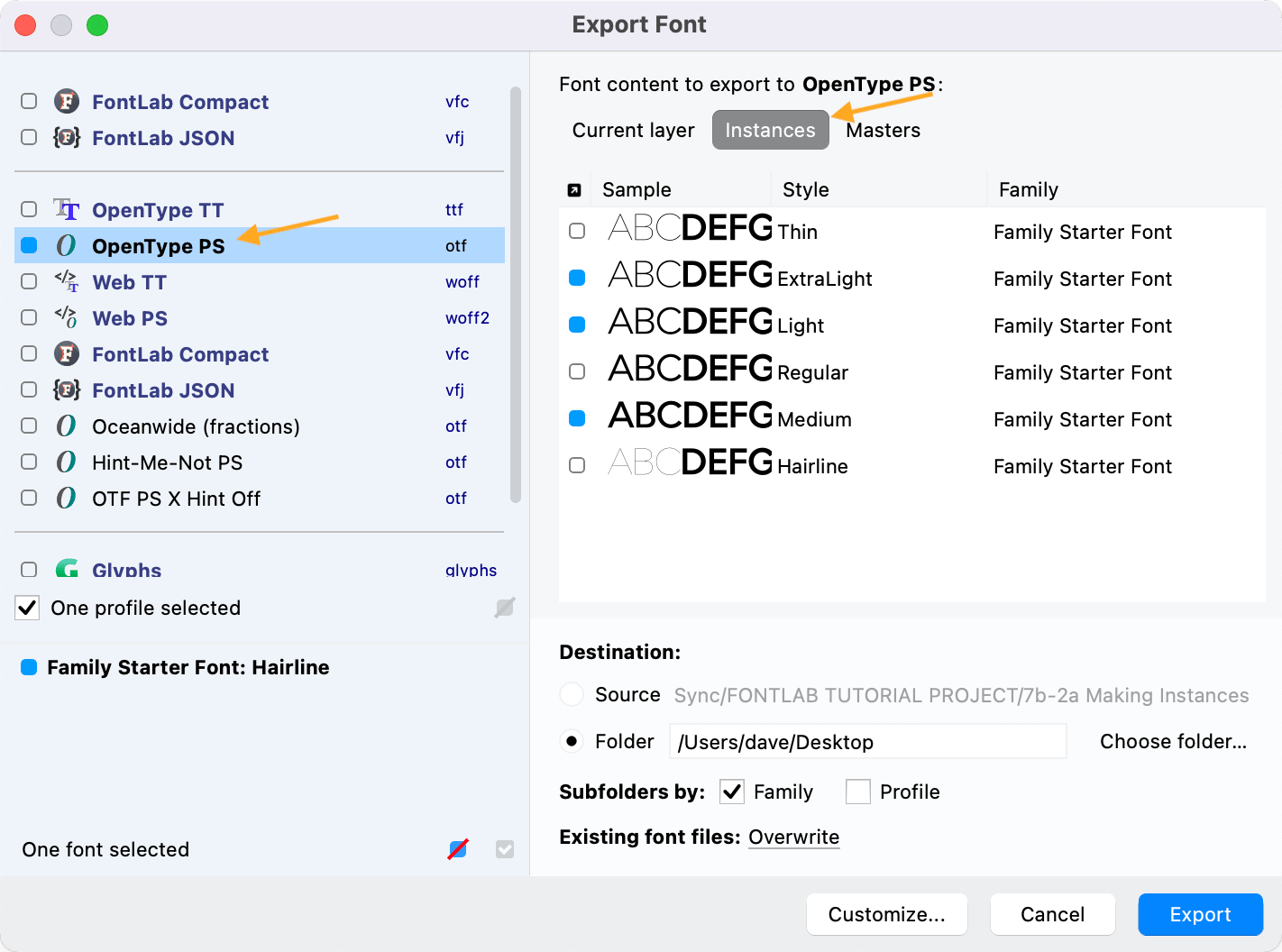 Very happy when I discovered this one.

Hold down option Alt while clicking to select or unselect everything!

Many times the instances can use the full name.

However, in the future, what if you create this font style.▼

You need some abbreviations!

Some operating systems and apps impose a length limit on the style name. Fonts with style names that are too long will not show up in the font menus at all, or their style names will be truncated. The limit is typically 63 characters. However, the style name portion is also used in the Full name, and in the PostScript font name, which have a shorter limit.

If the family varies in weight and/or width and you choose the appropriate Weight or Width Class from the dropdown in Font Info, FontLab can automatically build a style particle name for weight and for width, and then combines these particle names to form the style name.

You may yourself choose to use the Mid-length or Short particle names consistently across the entire family — in style names, in axis instances, and in style groups (see next tutorial).

For each weight class, the Weight column shows the standardized numeric weight class value, specified by the OpenType spec for static and variable fonts.

The numeric weight class value is often used by various systems and apps to select the weight. For example, it’s used in CSS (font-weight: 300;). The values can go from 1 to 1000, but if your font has no more than 9 predefined weights, use the full-hundred values (100 – 900). It’s highly recommended that your Regular weight uses the value 400. You may use additional in-between values if your family needs to have more than 9 predefined weights.

To set a weight class for a single-master font:

To set a weight class for a variable font:

The weight class numbers don’t need to correspond to the actual weight progression (thickness of the stems). In fact, they almost never do. But for computers, it’s important that the Regular weight has the weight class 400, and Bold has 700.

Font vendors have used various common particle names for a given weight class. In the following table, the WeightC column shows the numerical weight class values, with the best-supported values in bold. The Best column has a checkmark (☑︎) if a particle name is most common, and recommended. The Long column also shows the best-supported (recommended) name in bold. The Mid-length and Short provide abbreviated particle names, useful in multi-axis style names and in style group names.

For each width class, the Width column shows the approximate average width as a percentage of the normal width of the family. The percentages are from the OpenType spec, but you don’t need to follow them blindly. It’s up to you how much condensed you really make your Condensed style.

Font vendors have used various common particle names for a given width class. In the following table, the Best column has a checkmark (☑︎) if a particle name is most common, and recommended. The Long column also shows the “best” nae in bold. The Mid-length and Short provide abbreviated particle names, useful in multi-axis style names and in style group names.

Font vendors have used various particle names for the slope. In the following table, the Angle column shows the common italic angle for left-to-right scripts. The Best column has a checkmark (☑︎) if a particle name is most common, and recommended. The Long column also shows the best-supported name in bold. The Mid-length and Short provide abbreviated particle names, useful in multi-axis style names and in style group names.

Other axes and style attributes¶

Those are the basics. (Although there’s more you can do with instances.)

In the next tutorial, you’ll learn some special groupings that are required by retailers like MyFonts. You’ll set up Style Groups. See you then!