Use your mouse to adjust metrics and kerning with high-precision Lever dragging. Hide or reduce the visibility of spacing controls for distraction-free spacing and kerning.

If the Metrics tool is active: 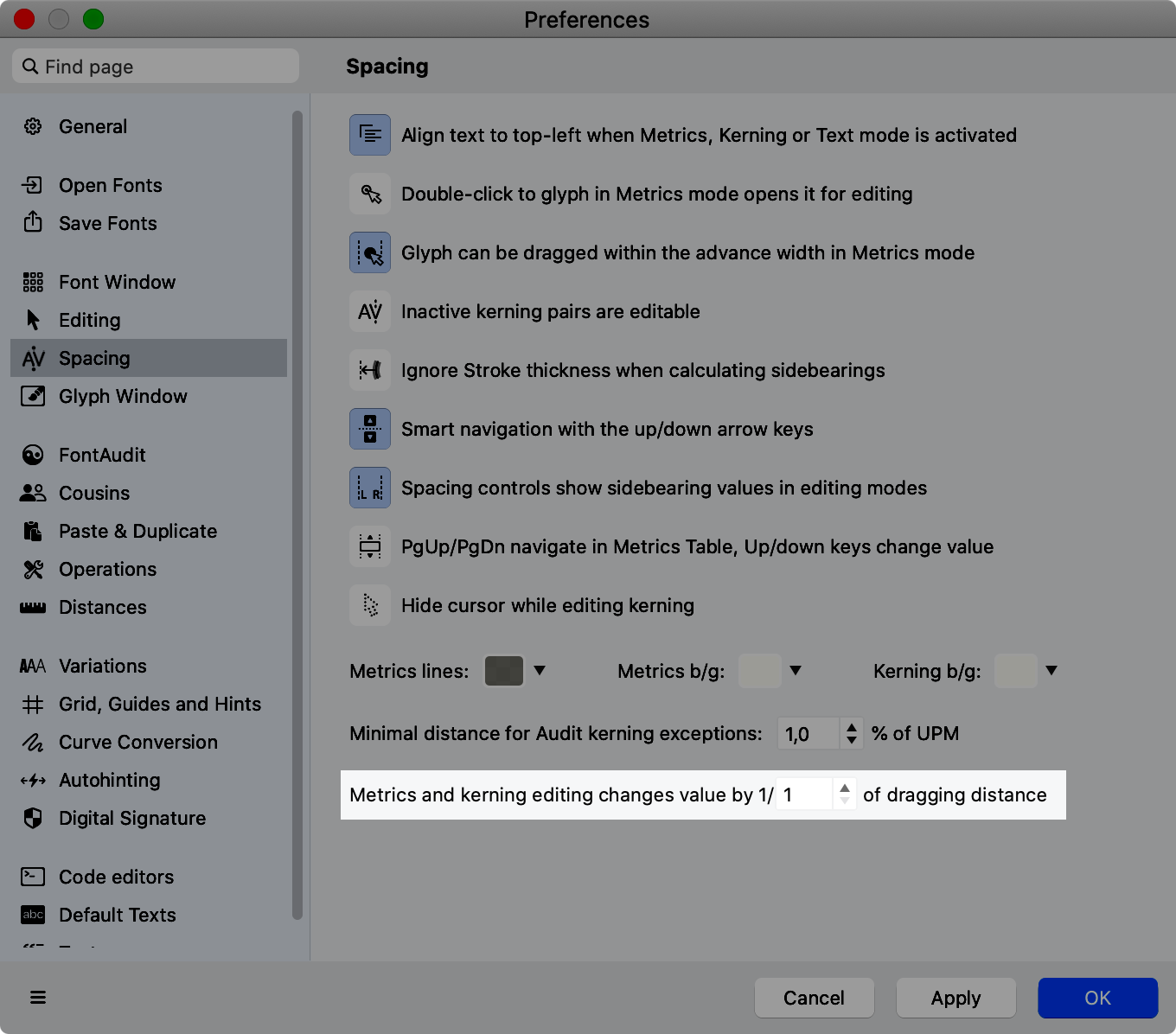 New The Preferences > Spacing page now has a new setting Metrics and kerning editing changes value by 1/n of dragging distance, where n can be up to 100. A reasonable value is between 4 and 10.

Shift-drag far to make larger changes. Then release the button and drag again by a small distance to make a precise adjustment.

New If you turn on View > Show > Spacing Controls and hover over the sidebearings in the editing modes and the Metrics mode, the Glyph window shows a cross at the intersection of the baseline and the sidebearings. This cross is now smaller.

New Also, if you change Preferences > Spacing > Metrics lines to a color with a lighter transparency, FontLab draws the cross more transparent.

If you want to edit metrics and kerning with your mouse, use Preferences > Spacing > Metrics lines to set the transparency to around 4%, and the spacing controls (sidebearings and the cross) will be barely visible. Also, in the Glyph window sidebar, set a higher linespacing to increase the distance between the baseline and the spacing controls.

The spacing controls (sidebearing lines) are draggable if the Contour, Element or Metrics tool is active, and if View > Lock > Glyph Metrics is turned off.

New If another tool is active, the spacing controls are not draggable.

New With the new Tools > Actions > Metrics > Remove metrics links action, you can remove all metrics links (expressions) from the specified glyphs and layers, so the sidebearings and widths become simple numerical values.

New Font > Metrics > Auto Space automatically calculates the spacing (sidebearings) for the current layer in the glyphs selected in the Font window or in the current glyph in the Glyph window.

To auto space the current glyph in the Glyph window, you can also tap :.

New If you turn on View > Metrics & Hinting Shadows in an italic design, FontLab takes the italic angle and caret offset into account when it renders the “shadows” for metrics, zones and hints.

New The Preferences > Spacing page now has a new setting Metrics and kerning editing changes value by 1/n of dragging distance, where n can be up to 100.

Shift-drag far to make larger changes. Then release the button and drag again by a small distance to make a precise adjustment.

If you turn on Preferences > Spacing > Inactive kerning pairs are editable and you turn off View > Show > Spacing Controls, you can rapidly make small kerning changes to all pairs that are part of the current Glyph window text.

Hide pointer as you drag in Kerning mode¶

If you turn on Preferences > Spacing > Hide cursor while editing kerning, and you drag a kerning pair in the Kerning mode of the Glyph window, FontLab temporarily hides the pointer during the dragging, so it does not obscure your view.

New The Font > Kerning submenu is rearranged for better readability.

New Click the Auto-kern button in the Pairs & Phrases panel to autokern the selected pairs using the new FontLab K2 autokerning algorithm, or tap ; in the Kerning mode to use K2 to autokern the current pair.

New Alt-click the Auto-kern button in the panel or tap Shift; to autokern using the old FontLab K1 algorithm.